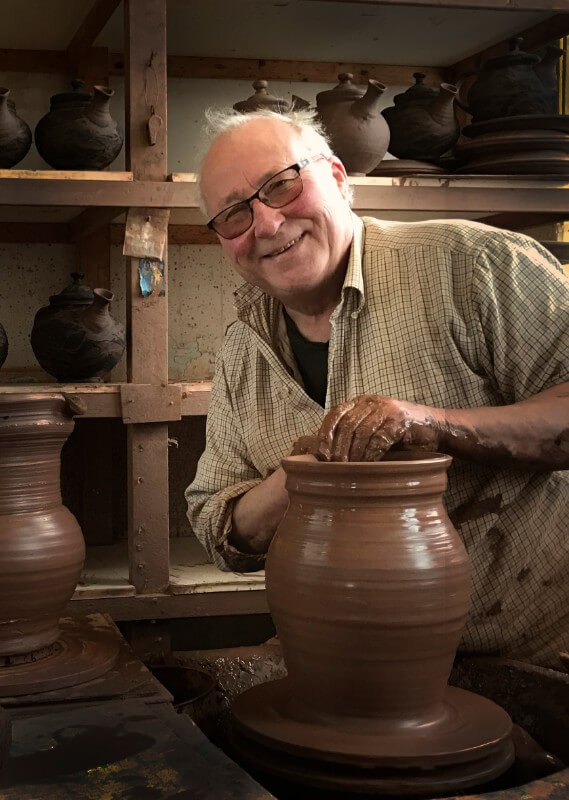 Born 1948 in Kent, Andrew Appleby became an independent wanderer from a very early age. The youngest of three brothers, he constantly lagged behind – and still does, even now, on a walk – finding clay in banks and around ponds, orsearching the ground for ancient artifacts. His natural tendency towards incendiary pursuits helped fire his meagre works from the age of seven, and at eleven he was smitten with the archaeology bug. This led to discovering a Neolithic site with quantities of prehistoric pottery… his yearning to make these pots was born.

He spent most of his secondary school years in the pottery department. His father, James William Appleby, had related his tales of Orkney in the army intelligence service during World War Two, so Andrew and his brother Malcolm hitch-hiked there from Kent. The archaeology, scenery, atmosphere and colours had a permanent effect and a decade later moved to the Isles permanently, setting up his pottery in an old chicken house at Fursbreck Farm in Harray. From his first weeks in residence, folk said, ‘You must go and see the Harray Potter! He’s just magic!’, hence its name.

Past Chair and Vice-Chair of the Orkney Archaeology Society, Andrew has seen Orkney’s archaeology scene blossom. He is currently President of the John Rae Society, honouring the Orcadian Arctic explorer.

Besides pottery, archaeology and exploration, Andrew has a strong interest in gathering food and road kill. This has led to appearances in television programmes such as Scotland’s Larder.

I’m so proud of my children!

Andrew values the creative role of family in bringing Skara to fruition. His daughter Ruth and husband Mark, who have moved back to Orkney, have three lovely youngsters: Inga (6), Angus (4) and Hamish, born early December 2014. Ruth was largely responsible for developing the outstanding Kristin Linklater Voice Centre on the Isles, while Mark is Deputy Head at Kirkwall Grammar. Andrew's son Nicky and wife Anna run two cafes in Cheltenham, with a third ‘on its way’. With Sigrid, his wife, Andrew has lived on Orkney for many years.

"quite remarkable… an enormous 'epic' fantasy/imagined history, which is extraordinarily coherent, detailed, accessible and plausible…"